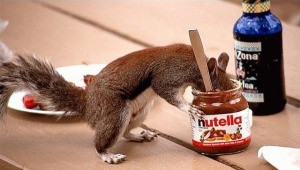 As many of you know by now I’m in love with pasta but there is another obsession in my life. Its name is Nutella.

Last weekend I felt the irresistible need to drown in that small evil jar and… yes… I did it! I finished off my jar of Nutella in only two days. I don’t feel ashamed… I don’t feel guilty…. (liar) but I absolutely needed that brown explosive mixture of almond, hazelnut paste and chocolate. And you know what? I found out that I have such a strong and deep connection with Nutella. Here is the thing.

1) It’s Italian like me. It’s produced by the Italian company Ferrero owned by His Lordhip Michele Ferrero. His father’s name was Pietro and he was the founder of the company in 1942. In a backroom of a pastry shop in Alba, Piemonte (Northern Italy), Pietro Ferrero decided to use hazelnuts because they were easily available and their cost was very low (it was the period of the World War II). He invented a cream of hazelnuts and cocoa to be spread on bread and he called it Gianduja. The first Nutella was sold in 1964. Michele’s still alive but please, don’t send him billions of letters… I’m sure he knows you love him from the bottom of your heart. Moreover Italian Post sucks.

This morning I was talking to a dear friend of mine. We both agreed on the fact that Nutella is one of the most delicious food in the world. We were pretty surprised when we heard about a San Diego mother of a four-year-old child who is suing Ferrero for claiming the product is a nutritious part of a tasty balanced and healthy breakfast. Athena Hohenberg claims Nutella contains dangerous levels of saturated fat and over 55% processed sugar. She also said that these ingredients significantly contribute to America’s alarming increase in childhood obesity and can cause type-2 diabetes, heart disease and other serious health problems. Are we talking about Nutella? MY Nutella?

NO WAY!! I find this lawsuit simply ridiculous. I think that we all have some weaknesses. I had one last weekend and I always have sugar cravings when I feel nervous but I became a fit person. I exercise every single day, I eat healthy and I drink a lot of water. It’s my new lifestyle. A “cheat” day – I prefer to call it a “treat” day – every now and then is fine. I made a good choice and you can do the same, apart from spreading Nutella on that bread. It’s up to you.

Ok, maybe the main ingredients in Nutella are not so healthy. Should it be considered junk food? Maybe yes but let’s face it. I think that one, two…. five tablespoons of Nutella once in a while never killed anyone, right? I know what you are thinking. This so-called junk food comes from Italy but my country is well-known in the entire world for Mediterranean diet. Italian dishes are healthier and you can rarely find fatty sauces or very deep-fried food. For example on our tables there is always a fresh bunch of fresh vegetables. And in America? I don’t like to generalize but a typical fast food meal in the United States or in Canada consists of hamburger and french fries. Obesity rates in these two countries are among the highest in the world. That’s nothing new. In Italy fast food means a sandwich or pasta, a slice of pizza or a piadina (it’s a thin Italian flatbread) with raw ham. Mmmh.. yummy! Actually I just realized that I’ve never been to McDonald’s here in Canada. I’m very proud of myself.

And finally here is my virdict: I find the defendant not guilty.

About pasta loves me